Not today , i aint been there since thursday,friday,saturday,sunday

But i met that fish for sure


Are you talking about that dude on Youtube that always say "Heeeeeey POPS, another big one.. WoOoOoOoOoooooo, another big one POPS WoOoOoooooo!" That guy? Then he would kiss the fish and release him. LOL
fishmore November 1, 2020, 5:10am #10
Erik Young, the wrestler turned fisherman? That dude is stacked... I'll take this as a compliment.. HAHA
kaitiaki November 1, 2020, 5:10am #11
Nice fish man!

With that beard, you kind of look like Alan from the Hangover movie.

Is your name Harry??

I do like duck dynasty, but have been growing beards since I left the Army.

Right on man, I was gonna' say something about that when you first posted the pic, but decided not to. Now I can just say nice fish Dave! 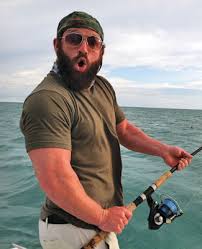